Friend R.L. Stine & me at his booksigning for his new Mostly Ghostly series, "Who Let the Ghosts Out?" and "Have You Met My Ghoulfriend?" 10-23-04, Geneva, IL 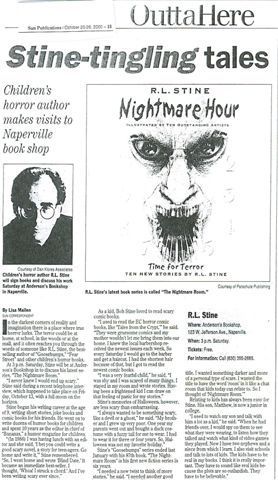 In the darkest corners of reality and imagination there is a place where true horror lurks. The terror could be at home, at school, in the woods or at the mall, and it often reaches you through the words of someone like R.L. Stine, the best selling author of Goosebumps, Fear Street and other children's horror books.

At 3 p.m. Saturday, Stine will be at Anderson's Bookshop to discuss his latest series, The Nightmare Room.

"I never knew I would end up scary," Stine said during a recent telephone interview, which happened to take place on Friday, October 13, with a full moon on the horizon.

Stine began his writing career at the age of 9, writing short stories, joke books and comic books for his friends. He went on to write dozens of humor books for children and spent 10 years as the editor in chief of Bananas, a humor magazine for children.

"(In 1986) I was having lunch with an editor and she said, 'I bet you could write a good scary novel, a story for teen-agers. Go home and write it,'" Stine remembered.

"So I went home and wrote Blind Date. It became an immediate best-seller. I thought, 'Whoa! I struck a chord.' And I've been writing scary ever since."

"I used to read the EC horror comic books, like Tales from the Crypt," he said. "They were gruesome comics and my mother wouldn't let me bring them into our home. I knew the local barbershop received the newest issues each week. So every Saturday I would go to the barber and get a haircut. I had the shortest hair because of that, but I got to read the newest comic books."

"I was a very fearful child," he said. "I was shy and I was scared of many things. I stayed in my room and wrote stories. Having been a frightened kid I can draw on that feeling of panic for my stories."

Stine's memories of Halloween however, are less scary than embarrassing.

"I always wanted to be something scary, like a devil or a ghost," he said. "My brother and I grew up very poor. One year my parents went out and bought a duck costume with a fuzzy tail for me to wear. I had to wear it for three or four years. So, Halloween was not my favorite holiday."

"I needed a new twist to think of more stories," he said. "I needed another good title. I wanted something darker and more of a personal type of scare. I wanted the title to have the word 'room' in it like a chat room that kids today can relate to. So I thought of Nightmare Room."

Relating to kids has always been easy for Stine. His son, Matthew, is now a junior in college.

"I used to watch my son and talk with him a lot as a kid," he said. "When he had friends over, I would spy on them to see what they were wearing, to listen how they talked and watch what kind of video games they played. Now I have two nephews and a niece from which I learn. I also visit schools and talk to lots of kids. The kids have to be real in my books. They have to sound like real kids because the plots are so outlandish. They have to be believable."